I was trying to set my new Samsung Tab 3 from English to other languages (Nepali, Hindi, Chinese Hongkong). Such languages were not listed in default Samsung’s  “Language and Input” setting, then I face a big problem. I search for other third party application to set other languages in my Tab. 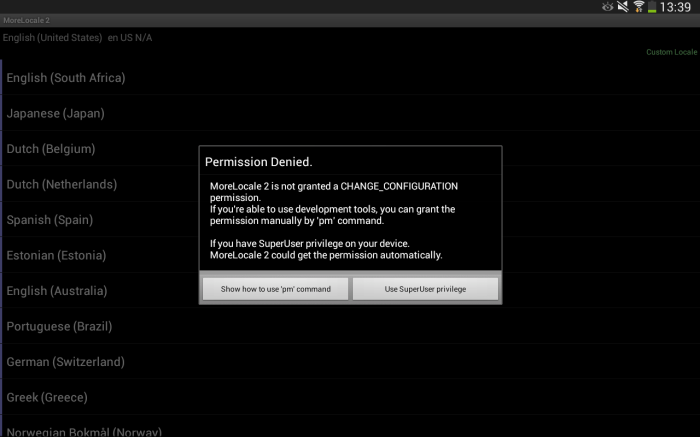 2. Now you need to unlock the Developer Option on your Android OS. To unlock:

Quite funny, but it will help you to unlock the Developer option. You will get the new tab named as “Developer Option” above “About Device“.

3. Enable USB Debugging from Developer Option by Checking on it.

4. Now its time to take help of Andorid SDK that has been installed a while ago. Open command prompt on your PC on admin mode and connect your Tab or Galaxy S4 or any Android device 4.2.2 via USB to your PC.  Then Type the following command from the right folder path location as shown in picture below :

5. Now you are almost done with this Android permission to change your desired language on 4.2.2. Open the apps More Locale 2, choose your language by pressing ISO639 and Set on your device.

My full name is Udhyan Timilsina. I am currently working as Core IT Engineer in TransPerfect View all posts by Udhy

123 thoughts on “How to unlock Developer mode to set multiple languages on Android OS 4.2.2”